I’ve got this great (Garant APP36KU) 36″ pusher snow shovel that lets me clear 3″ or less of snow on our 5′ wide sidewalks in two passes.  I love it.

But in certain cases, I need to bear down to “scrape” with it.  The simple handle design of the shovel doesn’t allow any good way to do that.  I can hold the middles of the long shafts with my wrists at an uncomfortable angle, but that doesn’t let me bear down very hard and so isn’t very effective.  I’ve been thinking (usually when I’m shoveling and need to be scraping) of how to change/add to the handle for a couple of years now.  I finally realized a simple bar across would do it. 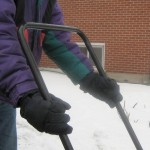 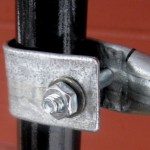 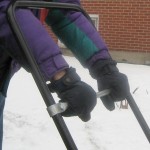 So I took a piece of 1/2″ conduit, flattened the ends, bent them around the shafts, and put a 1/4-20 bolt through to clamp the ends to the original handle.  Now I can hold the new bar and use the tops of my forearms to push up on the old handle to provide the “scraping” force.  Works great!  (OK, I didn’t actually bend them around the shafts.  There were pieces of pipe, many creative uses of a vise, an anvil, vise grips and a lot of hammering.)

I considered using aluminum tubing to reduce the weight, but tight bends in aluminum (like flattening the tubing) are pretty much doomed to failure through cracking.

And for any who might consider using flattened conduit as construction material to be  “redneck” technology, one comment:  “Y’all got a problem with that?”

Update 2/11/21:  The dear old yellow shovel plumb wore out.  It was leaving artistic, but annoying stripes of snow behind because the wear strip wore out.  The one I ordered maybe in 2019 to replace it was similar, but with a different handle  (and blue!).  The blades were almost identical. uneven concrete block edges that make the shovel go WHAM! when it hits.  If I could put some skids at the edge that would let it ride up over those edges, it might make the whole experience less unpleasant.  Here’s the idea.

I’m still trying to figure out how to implement it.  Fortunately, I have the old yellow one with the same blade structure so I can prototype in the comfort of the basement without hauling a cold wet shovel in and without time pressures.  (It’s a good thing I didn’t throw it out! 🙄)  I’ll post again if I get something put together.