My electronics workbench is in awful shape.  It hasn’t been cleaned up in several years, and has such a terrible pileup of debris and leftovers from previous or in-progress projects that I can’t free up more than 10 or 20 in² of fairly free working space.  (The bench is 7′ x 2′, and except for a hot air station, another soldering station, and a “third hand” with alligator clips and a magnifier, there’s nothing that actually lives on the bench.  Tools are in drawers underneath, parts, meter, scope, power supplies are on shelves above the bench.  So it’s really all an ocean of crap.  Largely good crap – but it’s still crap when it takes over the bench.)

It seems to go in cycles of several years, getting cleaned up once and then getting progressively worse until I can’t stand it and clean it up again.  It’s cleanup time again.

When the bench is clean, it calls out for me to work on projects.  Lots of space, clean surfaces, parts, tools – all waiting for something fun to build or fix.  Now that I’m down to two days of work a week, with full retirement only 8 months away, I’m not as afraid of that siren song as I was as a full-time workaholic.  Go ahead – call me to work on stuff!

I’m sure I’ve done some upgrades at other cleanup times, but this time I’m trying to take a large view and optimize the bench and surrounding area to a near-ideal workspace.  I want what I use most often to be very close at hand, and spend every inch of space efficiently.  Part of the challenge is to identify what I need and want to be close by and arrange for that to happen.  Another part is to figure out how the bench gets so bad and put things/systems/whatever in place to forestall the clutter.  And then there’s challenge during the many days of going through all the clutter to of trying to shave only the appropriate number of yaks along the way. 🙂

I also don’t know how to organize these notes on the cleanup/revamp.  At least for an experiment, I’ll try to put it all here in one (probably very large) post, updating various sections as progress occurs.

Since I rarely remember to take “before” pictures in a timely manner, the pictures below are after several hours work cleaning up.  I’ve probably removed the top 1″ or so of crap from the center area. 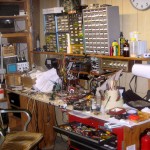 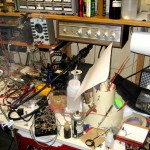 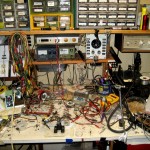 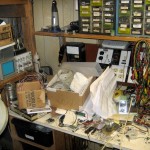 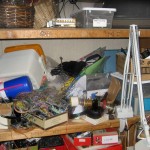 I don’t need to add much equipment.  Two possible upgrades are the bench multimeter and the oscilloscope.

The Sinclair 3 1/2 digit multimeter that has been a staple for what – 20 years? – will be upgraded to a new bench meter with more precision and more functions. I’ve kind of promised myself I won’t buy the new one until the bench is all cleaned up, as a little bit of carrot.

The 100 MHz dual trace Tektronix scope does everything I need, but is too big (too deep) to fit in the spot right in front of me where it belongs.  I even looked at cutting a hole in the panelling behind the bench to give its deep rump a place to go, but that doesn’t work.  It’s currently on a shelf just past one end of the bench.  Visible, but very inconvenient to adjust/use.  I can’t stand to spend actual bench space for it (and it still doesn’t fit well), though I suppose I could build a shelf and raise it maybe 6″ above the bench, allowing some use of the bench below it.  Or I could spend several hundred dollars and get a nice new LCD scope that could fit in the prime space easily.  I might even trade in the Tek for one, but that scope (a 2235) only seems to fetch $150-200 on Ebay.  I’d like the new one, but it’s hard to justify putting out the money with the Tek right there!  If I should get one, the $400 Rigol 1052E is a likely choice.  It’s a dual channel 50 MHz, but there seems to be a firmware upgrade hack that kicks it up to the next model – the 1102E – complete with its 100MHz performance! The jury is still out on that one.

UPDATE:  My wife suggested a pull-out shelf for the scope starting from its current position.  I have several sets of very heavy duty full-extension ball bearing slides designed to hold computers that weigh a lot more than the scope.  If I built a pull-out, it would put the scope in a much more useable position.  Not quite as nice as a new LCD scope front and center, but very useable and a whole lot cheaper.  And the several inches of space below it would still be available (unencumbered by stuff to hold the scope up), perhaps for several project storage boxes.  Still no final decision, but this is heavily under consideration.  Thanks, hon!

There’s a nice temperature controlled iron integrated with the Aoyue 906  hot air station, but for some reason I went back to my old aqua Weller WCC-100 station.  If I could dump the Weller and be happy with the Aoyue, I could free up a little more space.

Of course there’s stuff like the battery tab welder, but that’s used seldom enough that it doesn’t get to live on the bench.

And a computer?  There’s no computer on the bench.  I’ve rarely felt a need for one.  The computer workbench has evolved a mini-electronics area so computer+electronics projects pretty much happen there.  That will get a revamp as well – but that’s for a separate project.

[Maybe sitting back and brainstorming what would make a ‘perfect’ workbench might offer some insights.]

What’s wrong with the current bench

[Should this be keyed to the previous section?]

[Do I need a section to list what’s good/right about the current bench?]

Integration with the rest of the basement

The electronics bench lives in the (sub) basement.  Issues of space and storage merge and segue into discussions of space utilization in the whole basement.  That’s another whole major project by itself.  What I really need is a techie space planner to come in and keep me honest and figure out how to revamp storage for the whole basement.  Any volunteers? ♥ Solderless breadboards are a mainstay of electronic play, and a couple of them live on my bench.  Sometimes I can free up a corner of one to put something together, but mostly they’ve lived for years populated with old projects, some of which I don’t even remember, making them essentially useless (but still consuming prime space!).  So I boldly stripped all the parts off all 3 boards so I’d be ready to go when the bench is cleaned off.  Since you always need some kind of power, I allowed myself the luxury of putting nice semi-permanent places to clip power supply leads on to two of them.

♥ Not exactly from stuff on the bench, but there was a fluorescent fixture (2 x 40W 48″ tubes) near the bench in which only one tube had worked for a few months.  New tubes didn’t help.  When I put the fixtures in, I bought several of the same model.  Another failed about 2 years ago in a similar way.  I’d replaced that fixture, but stashed the old one in the rafters.  Might it yield parts that would help me fix the newly failed one? I took the failed one apart and found a clearly failed capacitor.  Discolored, burn marks, etc.  I made a quick schematic of the fixture, hoping that might add some insight.  It didn’t – partly because of two small mystery PCBs, one in each of two wires running from one end to the other.  They had a few resistors, a diode, a cap, and what looked like a transistor.

I pulled the one remaining cap from the early failure (the other had clearly failed quite dramatically), put it in, and both tubes worked!  One more thing that’s been on list for months taken care of.

[Maybe recap when it’s all done with some thoughts for someone trying to organize/reorganize a bench?]

This entry was posted in Electronics workbench revamp. Bookmark the permalink.