I’ve connected/assembled enough stuff to actually test the first version of the battery tab welder.  And it works!  It’s certainly not in final form, but it very clearly functions as intended, and the welds test good!

There’s really nothing to it but the cap, the SCR, fat wires and electrodes, and a switch to fire the SCR.  (See the first picture.)  This first prototype/test setup only uses the new (much larger) cap.  I had planned to parallel in the smaller cap for a little more energy, but it seems to produce near-ideal welds as it is, so I don’t see much need to make it any bigger and more complex.

The first pic is the whole prototype setup.  The funny shaped thing is the switch – just a microswitch still on its bracket from a previous life.  The power supply is not in the picture – just some white zip cord and red and black clips from it.  Yes, I will insulate the cables and electrodes.  And yes, I’m holding them in my bare hands.  And yes, there’s a huge amount of energy in the cap – more than enough to kill a person.  But the cap’s only good for 18V, and I’m running at maybe 13.  I couldn’t feel that if I tried.  (At least in my hands – I could certainly feel it if I put the electrodes on my tongue.) 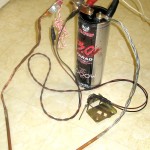 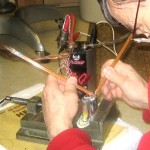 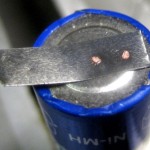 Destructive testing of the weld 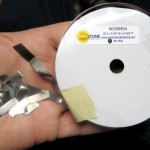 There’s a picture of my first weld – a bit of .005″ scrap nickel strip from some old battery pack I tore apart.  Those 2 welds were done in one shot – with the electrodes both on the strip.  Current went from one electrode down thru the strip, across through the bottom plate of the battery, and back up through the strip to the other electrode.  That’s the ideal way to do it.  If you don’t have quite enough power, you can put one electrode on the battery plate so there’s only one resistance point to take all the energy for one weld.  It obviously takes twice as long that way, since you only get one weld per discharge.

I tested the first weld the standard way – by tearing the strip off.  I had to pull fairly hard, and the result was 2 holes in the strip where the welds were.  If the welds are strong enough to tear the metal (rather than the weld coming apart with the strip intact) you have a good weld.  That seems to be what happened here.  One other possibility is that there was too much energy and it essentially burned through the strip.  There were little raised places left on the battery plate, but I don’t have enough experience to say any more.  But others running similar welders often run higher voltages – up to 19 or 20 volts (the limit of the cap) – and since energy is proportional to the square of the voltage, going from 13 to 19V more than doubles the energy available.  That makes it seem unlikely I’m running so hot that I just burn through the strip.  But I’ll do some more tests at lower (and higher) voltages to see what happens.

One of the open issues was how I was going to attach the cables – four #16 stranded wires (from zip cord) braided together to approximate a very flexible #6 – to the electrodes.  I ended up overlapping the wires and electrode generously, binding them together with some thin copper wire, then squeezing and hammering them down so they made the best possible contact.  Then I fluxed and soldered those joints.    I stripped the little wires off afterward.  The best indication of whether the connections are good is probably to feel them after a long session of welding.  If they’re warm or hot, the connection isn’t good enough and I’m wasting energy there.  I’ll have to feel all the connections after a good session and see what’s hot – so I know what to improve.

I saved scraps of nickel strip from battery packs I tore apart and rebuilt so I’d have at least something to play with when I got my welder going.  But then I broke down and bought a 25′ roll of 1/4″ x .005″ – the real stuff.  (You might need something heavier and maybe wider if you were building battery packs for an electric bicycle or some other really high current application, but what I have should serve my expected battery rebuilding projects just fine.)

There’s more work to do – insulating, mounting it in a robust manner, making a good foot switch to fire the SCR and turn off the power supply, and probably making a dedicated (and portable) power supply for it.  But it very clearly works, and even in its crude form it allowed me to make the 20 welds I needed to make my first battery pack (a backup for my cordless phone).

I’ll post more when I’ve made it more robust.  But it works!