These notes (written 1/17) are more details about my work career/history. In the spirit of the project notes, they're mostly to capture details before I forget any more of them :) All were in the Chicago area.

My first work was as a junior sexton at our church when I was probably a young teen. That might have gone on for a few years.

Somewhere in here - maybe as a summer job while going to Grinnell? - I worked as a motorcycle mechanic/grunt at Carr's Honda.

After I flunked out after 2 years at Grinnell, I got a full time job as a stock clerk in a warehouse for maybe a few years. When the draft started to threaten, I enlisted in the Army so I could attend electronics school and maybe avoid the front lines. While I'd gotten my Novice amateur radio license when I was 11 under the tutelage of my cousin Chris Grant and had been playing with science and electronics since before that, the Army provided my first formal electronics training. I spent a year as an electronics tech in Viet Nam (~1967) for the Decca VLF navigation system, and another at Fort Sheridan after I returned home.

Those Army years provided significant life clarification. While the guys were OK, I realized that I didn't want to spend the rest of my life with "dese and dem and dose" kind of people. If I wanted to escape that, I was going to have to go back to school and get a little more serious.

When I got out (~1969) I went back to school at U of I in Chicago, working on a BS in Physics. While there, I created an alter-identity as Tony Lincoln to sneak into a computer programming class. (For no more than submitting a batch job (on punch cards, of course) with a name not on the list, a new computer account would be created. I'm in!) I learned Fortan on my own that way, and became a fixture at the computer facility, helping new students and working on my own programs. Everyone there knew me as Tony, as the green-ruled fanfold job printouts had the user's name in bold ASCII graphic lettering. When an IBM assembler class was first offered, friends pushed me to take it. A prerequisite was the basic Fortran class, whose content I was quite comfortable with, but had never taken. If I asked for a waiver, I'd have to admit to my fraud. Uncomfortable. But I did it, got sufficient forgiveness, and added real computer classes to my studies.

After squeaking by and getting my BS by agreeing not to pursue a career in physics, it was time to face getting a job. Teaching had always been on my radar, and I joined a program at DePaul for an MS in Teaching Physics. It was an unusual niche program, but Gerry Leitz (and others) made it happen. With that degree and whatever it took to get teaching credentials, I started my career as a teacher.

I taught science (maybe not physics) for a year or so at Mother of Sorrows girls' high school, and then got a full time job at Bremen High in district 205 in Midlothian. I was "the physics teacher", though I taught mostly other science and maybe a little math. I think my total teaching career was about 9 years.

While I was doing that, I became actively involved in the ISPP (Illinois State Physics Project?) group, and even got an outstanding achievement award from them (an apple peeling machine with an inscribed plaque). Those were good times.

When Lauren was bumped from her teaching job, I couldn't support us both comfortably on my teacher's salary, so I sought a job in industry. I took a job as a hardware/software engineer at the small, privately owned Rich, Inc. We reverse engineered keyboard/video interfaces to financial systems, and designed, built, and wrote software for a system integrating others' disparate systems. While I started with a soldering iron and a scope, I progressed to having my own VT-100, and eventually even my own PC on my desk!

Among various hats I wore with Rich, I was for a while Vice President of Technology Assessment. Eventually, Rich was bought by Reuters. Some found I'd been a teacher, and I became, then headed the training department, then a technical writer. Hardware faded, and we morphed to a software organization. (The nice Tektronix scope at home was a parting gift from the old days.) I became a C software developer, then development manager. They made me a manager for a while, but we agreed that wasn't a great fit. I finished my almost 30 years there as an elder in the support group for our software. We were colocated with the developers, and I could speak both their language and that of the outside world of customer-facing support groups, and added value by being a buffer layer between the two. To help keep our lab of a few hundred machines running, I became a linux sysadmin, not as an end, but just so we could configure the machines to reproduce and troubleshoot problems that was our day job.

Between Rich, Reuters, and finally Thomson Reuters, I went for working in an engineering department with a dozen guys to part of a large international company without ever actively changing jobs.

I closed out that chapter with a retirement option I couldn't refuse in Feb, 2009. I worked there for 3 more years - same group, same work - but as a part time consultant. The two years of 3 days/week was great - the extra days off let me get a lot more done at home. The last year of 2 days/week was different: Those two days of having to go into the office were a nuisance. Interesting. 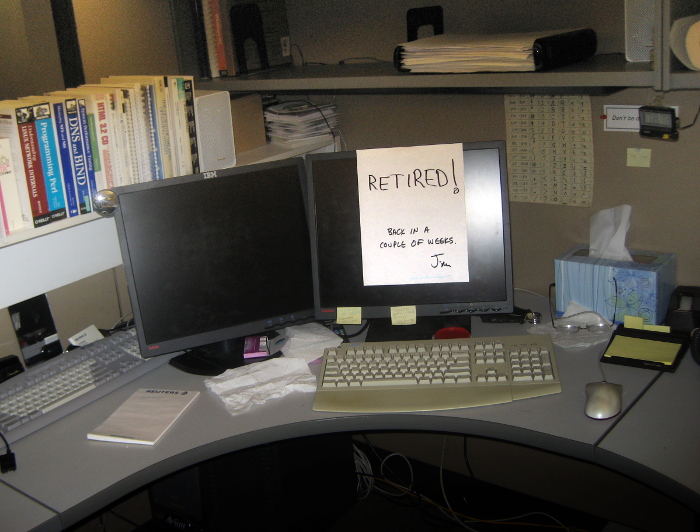